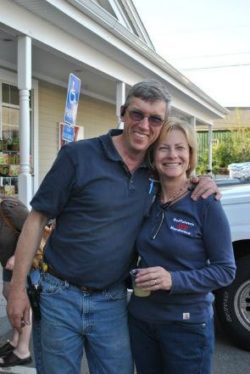 1937 – F. W. Lane Hardware is founded by F. Woody Lane and his wife, Mary. The store is located in the southern (right) side of 23 Main Street. The store probably occupied less than 800 square feet. The site is now occupied by Vikster’s Pizza.

1952 – Herb Johnstone purchases the 24 Main Street property from the railroad and moves the depot westward to make room for a new, single story, flat roofed brick building with a modern glass and aluminum front. Goffstown Hardware is moved into the new building.

1962 – Goffstown Hardware and the property at 24 Main Street is purchased by Carl Barton and Joseph Jason as an investment. The purchase is made with an agreement with Bob Brown that he will manage and operate the hardware store.

1965 – Larry has spent a lot of time in the store since he was 11 when his father began operating it. Now, at 14 years of age, he starts getting paid for his part-time work at the store.

1966 – Bob Brown removes the partition that separated the two business’s in the 24 Main Street building and expands Goffstown Hardware into the space. The store has now grown to 2,000 sq. ft. of retail space.

1969 – Larry and his Dad undertake a major remodeling of the business.

2000 – After a couple of years of living in Boston and working in the hotel management field, Karen yields to the calling she has heard since childhood and joins her parents in the family business as General Manager.

2006 – In August, as expansion plans move forward, Goffstown Hardware ends its relationship with True Value and becomes a member of Ace Hardware.

2006 – In November, all of the buildings on 3, 5, 7 and 11 Depot Street are demolished, the lots are merged into one, designated 5 Depot Street, and construction of the new, 15,000 square foot building begins.